One of the biggest concerns I had with Windows7 were the claims that it was even lighter weight than prior operating systems.  As most of us developers already know, this statement is generally B.S.  The more advanced the version number, the more bloated the code, right?  Not so much.  As you can see from the performance specs attached to this blog post – the numbers for the Atom are relatively low (2.2 on a scale that goes to 7.9) – but I am very impressed thus far with the snappiness of Windows 7 – it actually “feels” quicker than the previous Windows XP Pro install.

Now, I have added a 2GB RAM stick to the Lenovo S10, and have also added a WD Scorpio 7200RPM 320GB SATA HDD.  This is reflected in the overall performance specs.  As a matter of fact, I installed Windows 7 64-bit on my Mac Pro with a relatively lackluster WD 2500KS 250GB drive and the benchmark on the S10 is actually better than that of the drive in the Mac Pro!  Another interesting note is that it is well known that the Lenovo S10 has a two gigabyte memory limit, it comes with 512MB on the board, and then with a 2GB stick – you still only see 2GB of RAM instead of 2.5GB in Windows XP or Vista.  Suprisingly, Windows 7 is reporting the full 2.5 GB.  I dont know if this means it can use it or if it just knows that it is there, but it is definately reporting the extra 512MB correctly.

The other benefit thus far to Windows 7 is battery life.  My typical full battery drains on the S10 have been around 2.75 to 3 hours at best when using the balanced power plans.  My first two full battery drains since switching to windows 7 have yielded 3.25 and 3.5 hours runs – impressive to say the least – especially given that my S10 only has the standard 3 cell battery. 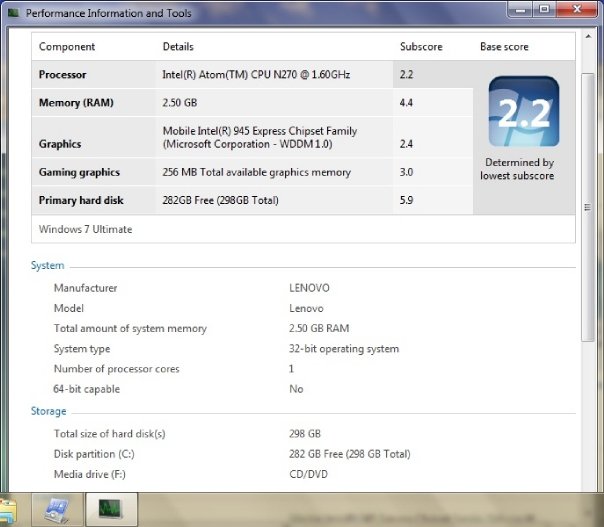